Daine contacted me in late October of 2021, looking for a logo design for his engineering firm. They are a business-to-business company that designs, builds and tests mechanical equipment in Red Deer, Alberta.

Conceptually, Diane didn’t have any preconceived ideas on what he wanted his logo to look like. He was more concerned about the logo working with some ideas he had on how he would use it. He needed it to be industrial, simple and modern and that would serve their business-to-business needs.

I set off with an open canvas to start. During our consultation, Daine had mentioned possibly using elements related to Alberta, or perhaps the initials of the company (EMD) as something he wouldn’t mind seeing as options. I did some research into elements related to engineering design and developed the 4 starting concepts:

A. Combination Gear & Initials
I combined a simple version of mechanical gears with so different renderings of the initials of the business. When trying to keep a design simple, it can quickly get away from you as you think there isn’t enough “design” in it. I did my best to keep this rendering as simple as possible and paired each option with different typefaces, one with softer, rounded edges and one more standard serif font.

B. Mountains Gear Effect
For the second concept, I wanted to still use the gear idea, but I wanted to also try and bring the mountain idea in as well – to represent the Rockies found here in Alberta. I paired these two concepts with more modern fonts that created that bold and industrial look they were looking for.

C. Protractor Design
Another common piece of what Edge does is the design phase of their process. This includes lots of tools like protractors and rulers – so I wanted to try a concept based on those ideas. I drew two different protractors, one that included a nod to the company name with a subtle ‘E’ in the design and both included a gear at the top. For typeface pairings, I stayed with simple and bold ones that allowed the business name to pop off the page.

D. Initials-Based Design
The last concept was built from the initials of the business EMD – a fairly trendy logo mark in the 2020s. In the two separate designs, I wanted to present the initials in two different matters. One would represent the initials as a standalone element and the other as more of a negative space concept, with the initials being placed in some form of geometric shape. 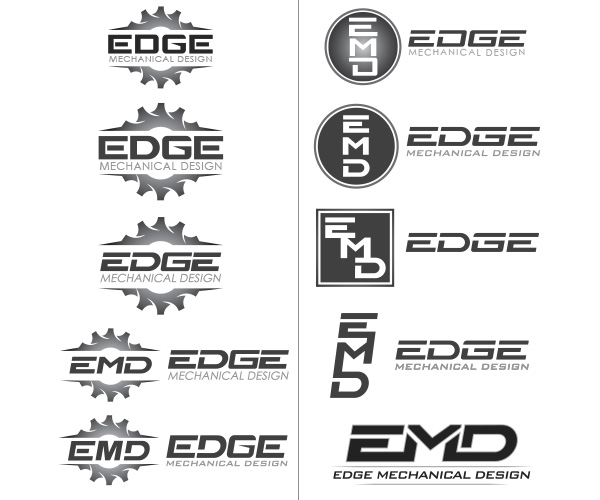 After an initial review of the concepts, Daine narrowed down his choices to the initials-based logo and the mountain-referencing gear logo. For the mountain-gear logo, most of the revisions centred around the typeface I supplied with the original concepts. I made some custom changes to the D and G to create more curves thus making the letters more distinguishable as the letters they are.

Daine really enjoyed the one font and the initials concept as well – so combining the newly “created” typeface I provide new examples of how the initials could look as a logo. Variations in orientation and supporting graphic elements gave them a few different options to choose from. 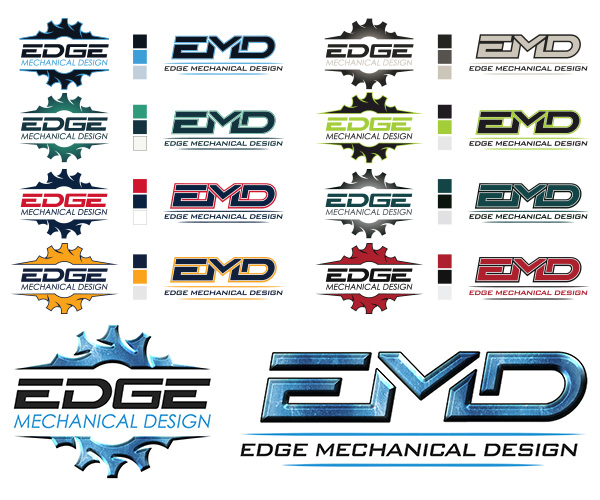 After the revisions were made, I set out applying colour theory to the chosen two concepts the client believed represented their business the best. I try not to only supply traditional or common colour combinations – but pair those with more exciting and unique ones as well. Now, I normally don’t do this with a lot of logo designs, as the KISS theory is extremely important logo, but I also pulled the logo into Photoshop and applied some 3D metal texture as I felt in this case it fit with the branding goals of Edge Mechanical.

The final made logo decision was made to the mountain-inspired gear design and a classic colour scheme of navy and red, with a slightly modern twist. For their business, I think that was a top choice as it represents power, authority, passion and excitement. The chosen design is strong and simple. It is a perfect representation of the type of work that Edge does and most importantly it will work great with some of the marketing and branding ideas Daine presented to me during the briefing.