Gary, the owner of Cages Holdings reached out looking for a logo for his business in May of 2021. His business is an appliance and furniture refurbishing business located in Red Deer, Alberta.

During the briefing, Gary had a very specific idea that he was looking to have created. His idea was to use a tiger head to build the ‘C’ in the name of the business. He wanted something that resembled more of a sports-type logo. During our discussion, we talked about me presenting a second concept just to ensure we cover all our options for his business. We discussed a colour palette of Oranges/Yellows and Blacks for the overall design, so I bypassed my normal design process and started designing with colours.

With the information gathered from our briefing, I set out to find the right source imagery to build a tiger head that both created a ‘C’ in the mouth of the animal, but also could be built into the sports-looking logo the company was looking for. The second concept was a bit tougher to conceptualize as I wanted to give a literal design as an option – but building a cage-like design into a logo was going to be difficult. 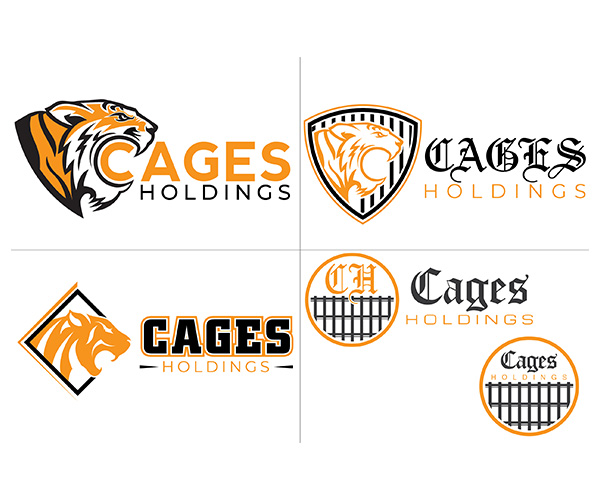 Concept(s) 1 – built from a tiger’s head I created two separate designs, one was a simple take on the tiger head and the other provided more details in the layout of the tiger. As requested, the more detailed design was shaped to put the ‘C’ in the mouth of the tiger. The rest of the design is a very detailed rendering of the tiger, which sharp/fierce lines and paired with simple and clean sans serif fonts. For the more simple layout, instead of placing the ‘C’ within the tiger’s mouth, I shaped the mouth to be in that ‘C’ shape. To create a more defined graphic portion of the logo, I encapsulated the tiger head with a diamond-shaped border.

Concept 2 – playing on the idea of a cage, I laid out two different designs using old English fonts, as requested by Gary. Both cage designs were enclosed within a circle with different elements to provide different takes on the same concept.

Concept 3 – a combination of the two ideas where the tiger head from the first concept is placed within a cage to give the overall look.  I paired this design with another version of an old English font, to give Gary and his team more options to decide upon. Normally, I would never recommend using these types of fonts in a logo design, but sometimes clients have to see it for themselves before truly understanding the difficulties they can present. 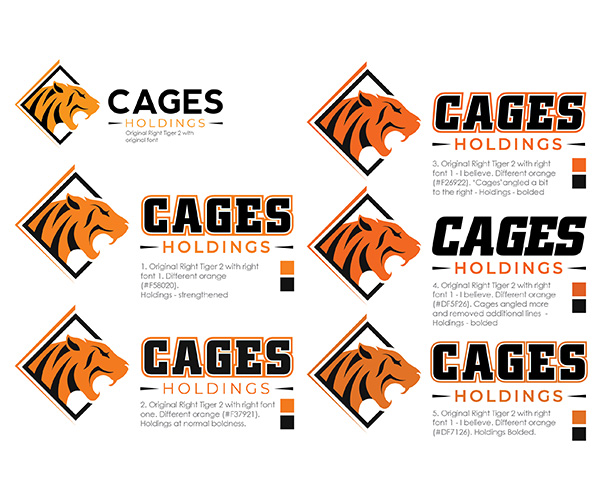 The requests for revisions came swift and accurate, as Gary quickly decided that the tiger head was the way to go. I had raised concerns that encompassing the ‘C’ within the tiger’s mouth may be hard for viewers to pick up, so part of the revisions was to try and make it stand out the best it could. I made some changes to the design on the tiger, changed some colouring and added some outlining to try and differentiate the C and the mouth enough to make it a viable option. For the simpler designs, I added black striping to the inside of the tiger to give it more depth and at the request of the client, I paired it with a few different variations of typefaces to find the right partnership.

Once Gary had decided upon which concept he wanted to proceed with, it became all about adding the finished, finding the right colour scheme and creating the final rendering you see at the top of the page.

The final logo design is a simplified version of the idea that Gary had when we first spoke. The tiger head was broken down into its simplest form while maintaining the representation of strength and independence it is known for. Pairing it with a bold but readable font pairs well in drawing attention to the important info.